The Fuzzy Peach Frozen Yogurt Bar opened its doors to the Wilmington community in 2010 at its flagship location in Racine Commons, which happens to be under a mile from UNCW’s campus where the three owners first met. Rocco Quaranto, Wells Struble, and Jason Nista met as freshman on the track team and graduated from UNCW with business degrees. A short two years later, they opened the first Fuzzy Peach on a shoe string budget, bringing to Wilmington a new sensation in frozen desserts.

The Fuzzy Peach offers a range of zero fat and low fat yogurt flavors, as well as sugarless and lactose-free options, from the traditional to novelties, such as Apple Pie and Egg Nog. Their fresh topping bar includes everything from fresh fruit and candy to Captain Crunch cereal. Their variety of options allows the customer to have the creative freedom to make their own versatile and delicious masterpiece. In a span of just two short years, they have added four locations, including Portner’s Neck, Monkey Junction, Downtown Wilmington, and their newest location at Carolina Beach. Rocco, Jason, and Wells co-own the Carolina Beach location with one of their Regional Managers and Director of Franchise Training, Tom Maskell. They are all 4 excited to be on the Island with such a great local welcoming!

The building they are located in has had some major renovations by the owner, which include a massive deck for Fuzzy Peach customers to enjoy. Some recent achievements include the implementation of both their catering and franchising ventures. They have begun catering in the greater Wilmington area, boasting that their services are perfect for events from school and business functions to birthday parties and weddings. They have also found success in franchising, with quite a few locations on the way, including Southport, Cape Carteret, Shallotte, Leland, Topsail Island, New Bern, and Morehead City.

They have recently begun providing a “bottoms bar,” which gives customers the option of picking a cup with either a homemade waffle bowl, or a brownie or cupcake made by Coastal Cupcakes, another Wilmington-based shop. Also, The Fuzzy Peach is now offering self-serve banana splits at all of their locations. The ultimate goal of The Fuzzy Peach is that it becomes synonymous with the word “dessert” to consumers nationwide. To accomplish this goal, they aim to work together with customers, employees, and franchisees to create an unparalleled dessert experience to the community. This group of young innovators guarantees satisfaction in every cup, day or night, rain or shine. Fill up and enjoy, because Life’s a Peach!
Posted by Unknown at 11:51 AM No comments:

With the insurance chains raising their rates, protecting your property, business, and family can be difficult to navigate in coastal areas. So don’t depend on a company that is in uncharted waters! Start saving today by contacting us:
Phone: 910.338.1773
Web: www.seasideins.com
Email: info@seasideins.com
Office: 1206 N Lake Park Blvd (2 doors down from Michael’s Seafood)
Posted by Unknown at 11:38 AM No comments:

Pleasure Island In The News

Our little island has been big news lately, first with a write-up in the Atlanta Journal Constitution on the weekly fireworks display found here throughout the summer:

And then Carolina Beach and Britt's Donuts were mentioned in a national broadcast of Weekend Edition Sunday from National Public Radio. The story centers around the commentator not quite getting the hype behind donuts as a harbinger of and must-eat treat of summer. A piping hot Britt's donut just dripping with glaze after taking a dip in the ocean or to kick off a weekend morning? What's not to get? Sounds like the author needs a trip to Pleasure Island to truly understand what it's all about!

Here are the films available for your viewing pleasure during July 2012 on Pleasure Island. A favorite island tradition, the Free Outdoor Movies at the Carolina Beach Lake are a treat for the whole family!

Posted by Unknown at 3:09 PM No comments:

The summer season is in full swing and there are a lot of great bands ready to help you beat the heat with some cool tunes! Here are some of the free concerts coming up this month:

Fireworks by the Sea and Boardwalk Blast Music:

The air is crisp, the nights are cool and the sky is blue – Welcome to Pleasure Island in the fall. And there is no better way to bring in Autumn than to attend the 19th Annual Pleasure Island Seafood Blues & Jazz Festival on October 13th & 14th. This years’ Festival brings 1995 Rock and Roll Hall of Fame Blues Icon, the legendary GREGG ALLMAN to Pleasure Island. In addition, there will be fourteen other blues and jazz groups on two stages over the two day festival brought to you by Bryant Real Estate and the Pleasure Island Chamber of Commerce at the Fort Fisher Air Force Recreation Area.

GREGG ALLMAN will arrive on Pleasure Island in support of his seventh solo album, his first in 13 years, Low Country Blues. As a founding member of the one and only Allman Brothers Band and in his own storied solo career, Allman has long been a gifted natural interpreter of the blues, his soulful and distinctive voice one of the defining sounds in the history of American music. Produced by T Bone Burnett, Low Country Blues finds Allman putting his own stamp on songs by some of the blues giants whose work has long informed his own, from Muddy Waters and BB King to Buddy Guy and Magic Sam. Named for the coastal Georgia region Allman calls home, Low Country Blues stands as a high water mark in an already remarkable body of work, rich with passion, verve, and the unerring confidence of a true survivor.

Tickets are just $40.00 in advance for a two-day pass or can be purchased at the door for $50.00 for Saturday (Gregg Allman plays Saturday night) and $15.00 for Sunday. Kids 12 and under are free. We ask that you do not bring coolers or pets, but bring your chairs, towels and blankets for a Pleasure Island style weekend. See you there! 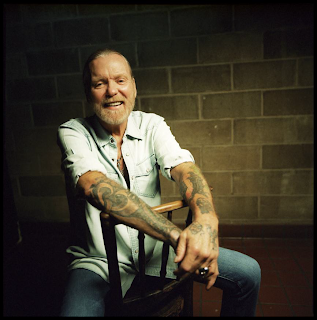 Ticket on sale now! Buy them today on Eventbrite.

Keep up to date with the latest on one of the area's most beloved blues festivals:
Official Web Page: http://www.pleasureislandnc.org/seafood-blues-and-jazz-festival/
Official Facebook Page: http://www.facebook.com/SeafoodBluesandJazzFestival
Posted by Unknown at 2:49 PM No comments:

Access Pleasure Island Info From Your Mobile Phone or Device

You can now use your smartphone or tablet to access the Pleasure Island Chamber of Commerce's new and  improved website. Enter www.pleasureislandnc.org or search for "Pleasure Island NC."

Bookmark the site for easy access. Check out the latest events, find a place for dinner, or plan your vacation from anywhere with mobile access to one of the best North Carolina beaches! 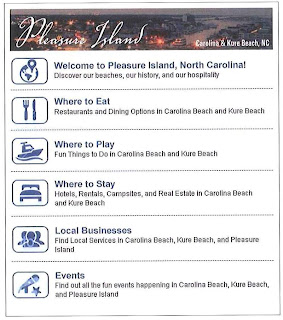 Posted by Unknown at 2:04 PM No comments: